Focusing on the process: Q&A with Colleen Mireau, technical supervisor at Millar Western 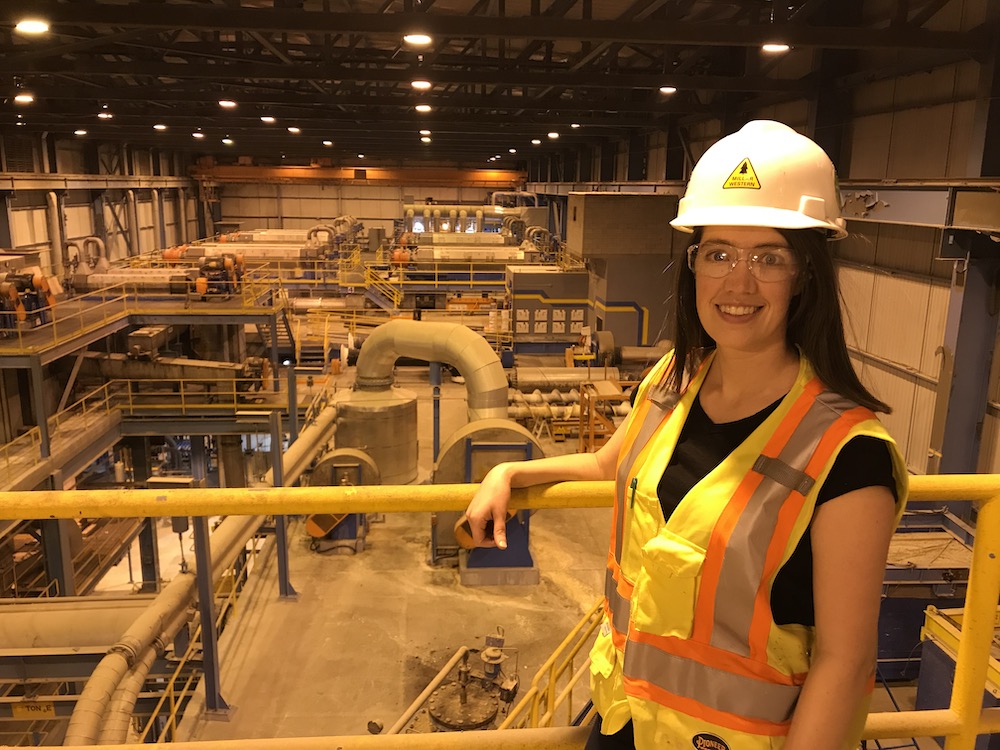 After a brief stint in construction, Colleen Mireau moved to pulp and paper, where she puts her chemical engineering degree to the test solving technological challenges in both the pulp mill and the bioenergy plant at Millar Western’s Whitecourt facility. She credits a supportive team for showing her the ropes in an industry that was previously unknown to her – and for lending a helping hand when needed.

Pulp & Paper Canada: What do you do as a technical supervisor at Millar Western?

Colleen Mireau: Technical supervisor is a secret way of saying process engineer plus! My main role is that I’m a process engineer, and then I also do a bit of supervision in our quality lab. And I do a bit of work with our process control group. I do morning checks and deal with the issues of the day coming up from production. If there’s no day-to-day issues, I get to work on projects, which are longer-term implementations or solutions that we’re hoping to install in the mill.

P&PC: What are some examples of those projects?

CM: There have been lots of different projects I’ve worked on, from chemical dosing systems to installing a pulp testing analyzer called the PulpEye. That was a big project that bridged a lot of the different hats that I wear. Also, little projects like chemical control valves and getting new flow meters.

P&PC: What was your role in installing the PulpEye?

CM: The PulpEye is really going to change the way we do things at the mill. I was involved in the project from first identifying that the old analyzers that we had weren’t meeting our needs anymore. Then scoping out different vendors – the different types of analyzers that other people are offering – getting quotes and pricing, seeing demos, picking the unit, and being the project manager for having the unit installed.

Then I went on mat leave right away, so I didn’t get to see the initial commissioning and implementation of it. But it’s back in my wheelhouse again, because it resides in our quality control lab and it’s maintained jointly by our lab group and our instrumentation group.

P&PC: What’s been the best part about working at Millar Western?

CM: The breadth of things that I’m able to do. Because we’re a bit of a smaller company, it’s just myself and one other process engineer. We cover the whole process – we don’t do areas. So we can get involved in whatever we’re interested in. And you learn so much with every project that you’re involved in. There’s a continuous opportunity for learning, because there’s always new parts of the mill to discover.

P&PC: What excites you about your future in pulp and paper?

CM: Getting to do a lot of new things. I’m really interested in process control, and we just recently made a process control group at the mill, so now I get to work more directly and more frequently with that group doing control changes. We’re working really hard on document management changes, which I’m heavily involved in, changing some of our internal processes for how we do projects and how we track change in the mill.

P&PC: What did you study to prepare for a career in pulp and paper?

P&PC: How about mentors? Did you have any as you started out at the mill?

CM: So many. I’ve had two great managers, Dale Holloway and Gerard Orlowski. They have been incredible mentors, just in the business of pulp and paper, and how it works. They’re both chemical engineers so they speak my language.

Scott Shannon has been at the mill for a long time, and so he’s been a great resource and teacher of how the mill works now, and the evolution of our mill. Ron Erickson is our salesperson and same thing. He’s got tons of experience in the industry in a lot of different areas – coming into the mill with customers and with end-use paper [merchants], he’s seen a larger breadth of things than I’ve seen.

It’s so interesting to get to work on projects with them and see their viewpoint, and every time I interact with them, they teach me a little bit more. I feel so lucky to work in a place where people are open and ready to share their knowledge with you. We all just want to make the mill better, and they’re willing to offer their two cents and help bring you up to the level they’re at.

P&PC: Coming into the industry without pulp and paper training, what were some of the greatest barriers for you as you started out?

CM: Initially, there’s a technical component where you’re behind, especially with certain parameters. Like, freeness is just so backwards and it can be really hard to grasp initially! But that is actually overcome pretty early in a career because in a year or two, you’re into the nitty gritty.

The other big thing that happened was about a month after I started. The process engineer who had been here for 15 years moved on to a different position. So I was the only process engineer at the mill for a while, and it was me against the world a little bit.

“I feel so lucky to work in a place where people are open and ready to share their knowledge with you. We all just want to make the mill better, and they’re willing to offer their two cents and help bring you up to the level they’re at.”

That was a barrier because there was no one to show me the ropes in terms of how to be a process engineer. I was taking over a lot of projects from the engineer that left, not knowing the full story, not knowing the history of it. I relied heavily on those other teachers – our process specialist, our operators, our operations manager – to fill in the gaps that were left behind. And they did a great job.

P&PC: What challenges you in your role now?

CM: Technical challenges. A lot of things don’t work in practice the way that they’re supposed to in theory. I’m doing a project with one of our biologists right now, troubleshooting our nutrient dosing system. And it’s a bit of a hard project because we don’t have very much measurement [in place], so we’re only getting feedback once a day on any solutions that we attempt. We’re looking into adding some flowmeters in the future to help and trying out a new probe for rapid testing of ammonia.

Another challenge is designing different experiments so that we can start to understand what’s happening so then we can correct it. That’s probably the biggest barrier, where you don’t quite have enough information. It’s not that you’re guessing — but that you have to find another way to answer the questions you’ve been tasked with, because there’s no easy way to get the information.

P&PC: Did you find that it was challenging coming into an engineer role as a woman in the industry?

CM: Not really, but that’s because that’s been my entire experience. Going through university, it was always 90 per cent men, 10 per cent women. Same thing when I was working in construction and when I did a number of co-op terms when I was a student. So it’s kind of been the same through my whole career.

It’s probably not something I would list as a barrier, because I don’t have experience independent of that. I’ve always been the only female in the room. The only female in a supervisory position. That’s just been my life. I don’t feel at this mill that it has shut me out of anything or made it difficult to work with anybody.

P&PC: How have you seen the industry change over the past nine years?

CM: Well, for sure everything’s changed this last year! Apart from the pandemic, the biggest change at our mill, specifically, has been to transfer knowledge as staff retire. Our mill started in 1988, and so there’s a lot of people who’ve reached their 30-year anniversary. They’re beginning to retire, and we don’t want to lose all of that collective knowledge.

P&PC: It’s a bit of a domino effect. You change one thing and then you have to change a bunch of other things.

CM: Yes. And I think we’re really seeing that as people slowly turn over at the mill. Someone comes in with new ideas and exactly that – it changes one thing and suddenly it’s changing so many things. So we’re seeing a lot of change in abilities of the mill process.

The other thing is, [during] my time here we’ve added the Bioenergy Plant. We’ve added an entire gas plant on the back of our pulp mill to harness the green energy from it. It’s really changed the role that each of us operates in, because now it’s not just a pulp mill – it’s a pulp mill plus a gas plant plus an environmental system.

P&PC: What advice would you give to somebody, especially a woman, who’s thinking about a career in pulp and paper?

CM: I think a career in pulp and paper is an excellent place for a female to be because it’s a really great career to marry home life and work life. You can get into a lot of situations where your work isn’t where you live. Here, you can actually maybe step out to see your kid’s Christmas play, or you can be home for dinner or bedtimes every night, which I, as a parent, have really appreciated.

I’ve also really appreciated the support of, I would say the industry at large but also the people within my mill. Not only to assist with technology and education, but I was nine months pregnant and still working at the mill. I needed to ask for help sometimes to move things. And no one ever batted an eye that I shouldn’t be here.

This interview has been edited for length.