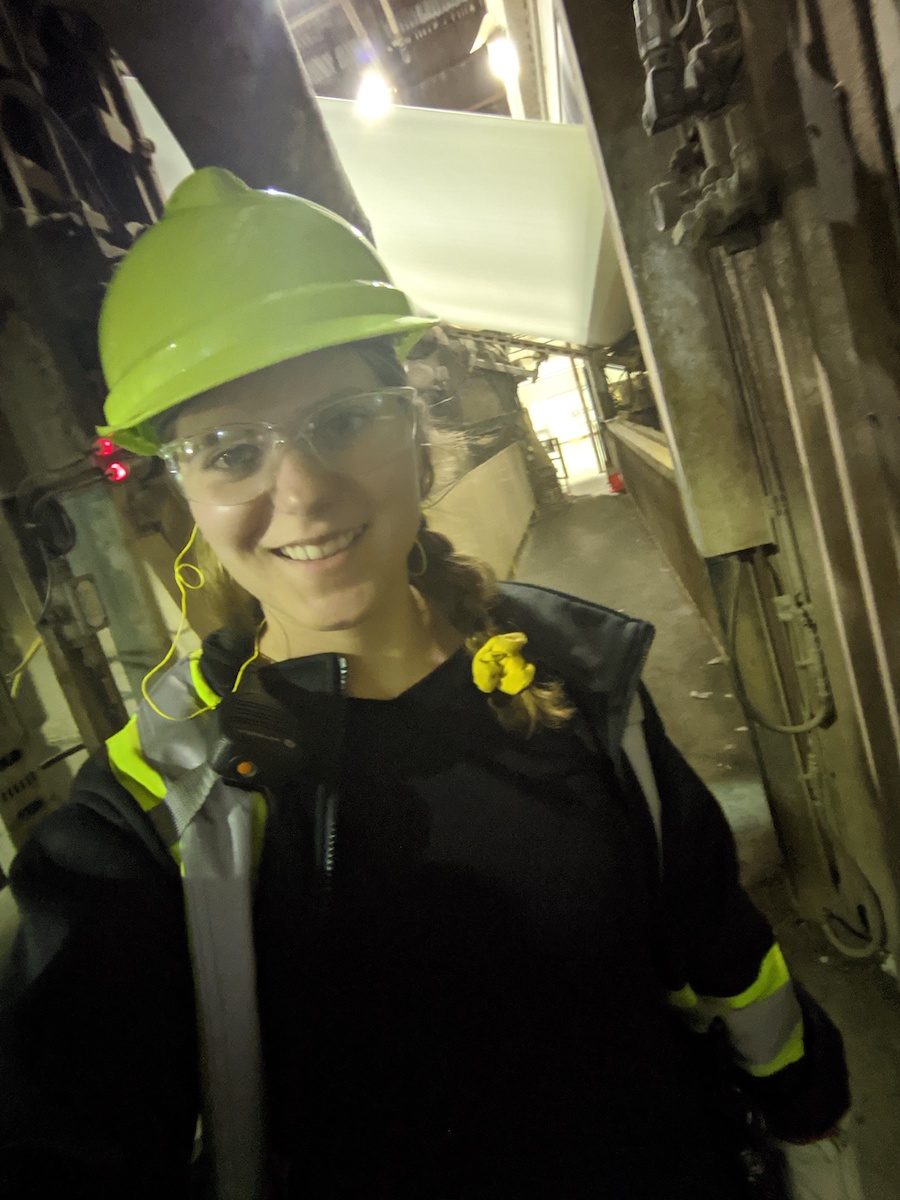 Part of what Nikki Stein says she loves about being a shift super is never knowing what she’s going to walk into when she arrives for her shift. In her former role as a process engineer, she could pause her projects for the night and take them back up the next day, but now her work changes daily depending on what transpired during the previous shift. “Each day is a new challenge,” she says. “And I’m a person that loves to keep learning!”

Pulp & Paper Canada: What’s involved with your role as a newsmill shift superintendent at Resolute?

Nikki Stein: I just started in the shift superintendent role [last] August, so I’ve been in it for a few months now. There’s five of us in the role, so somebody’s there 24 hours. We’re on 12-hour shifts. When I’m there, I’m in charge of the entire newsmill department – so that includes our TMP plant, the paper machine itself, the finishing and shipping department where we wrap the rolls, and the core room where we cut the cores to wind the paper on.

I work with the operators making sure that the day-to-day things are running smoothly, people are working safely, and that the process is going as it should. And any plans for the day, like upcoming maintenance or something like that, I coordinate to make sure that maintenance is going to start on time and that we have operations shut down on time, or lockouts done as we need them. I have a shift millwright, an electrician and an instrument technician [available] throughout the shift. If something happens and we need a fix, I call upon them and send them to that job to try to troubleshoot it.

Every day is different. You don’t know what you’re going to get into when you walk in, which is a big part of why it’s so interesting. Every day you learn something new, and it’ll be like that the next 40 years you work there. You talk to guys that have worked here for 40 years already and they say, “Yeah, I still learn something new every day.”

P&PC: What’s been one of the biggest issues that has come up during this particular role that you’ve had to deal with?

NS: Oh, where do I start! Some days, you could be running fine all day and then all of a sudden, a motor blows up or something like that, and it wasn’t even on the radar. We do have preventative maintenance and people going around checking equipment on traplines, but sometimes – it’s equipment, you just can’t predict that it might fail. If something like that happens and it’s a particular pump or motor that’s really important to the process, it may shut the whole thing down.

We have to get people coordinated and – even though we know this disaster just happened – make sure they take a step back and take a breather. It’s an industrial field. There are lots of opportunities for people to get hurt and injured, and obviously we don’t want that. So that’s a big part of the role and something that you really need to keep in mind.

It’s really just those unexpected things that you have to be able to adjust to, and, on the fly, be able to coordinate things, pick up the pieces and plan forward. There is a lot of support. We have a great team.

P&PC: You started your career at Resolute. How have you moved up within the company?

NS: I started straight out of university as an Engineer-in-Training (EIT) in the technical services department at Resolute Thunder Bay, where I got to go around to every department in the mill. I [went] to water quality, to the kraft mill and each of the departments there, and then also to the newsroom to get a feel for the different areas.

P&PC: What’s been the project that you’ve worked on that you’re most proud of in your time there?

NS: As you know, not that many people get newspapers anymore. Even just in the last five years the number of newsprint mills that have closed their doors in Canada is quite substantial – and not even just in Canada, but around the world. So, while I was in the process engineering role I was looking at new development opportunities and alternative opportunities for what we could do with our paper machine.

“I just love pulp and paper because it’s such a sustainable industry.”

I can’t elaborate on it too much, but it was a really interesting challenge because it was something that’s new and never been done before in our facility or in a lot of other facilities. We were trying to think outside the box, and think of something new that we could put on the market that we wouldn’t have too many competitors for.

[We were] trying to have some foresight into what the world is going to need and what the demand is going to be in the future. That was something really interesting and we made some good developments on that. To me, that was a big and exciting process.

P&PC: What excites you about your future in pulp and paper?

NS: I just love pulp and paper because it’s such a sustainable industry. I grew up in Thunder Bay and I still live here. Pulp and paper and forestry in general have been such a big economical player in the hometown that we live in. So, just to work in an industry that has that impact on where we live, it feels good.

The pulp and paper industry, I don’t foresee it going anywhere. Yes, the demand in newsprint has fallen, but there’s always going to be a demand for bathroom tissue or paper towels or just paper in general. People are always going to be using printers, or writing things down and taking notes. It is a sustainable industry and it’s always growing and changing, so it’s very intriguing.

P&PC: Did you know that you were going to go into pulp and paper when you started your engineering degree?

NS: I had no idea, not a clue. But again, being in Thunder Bay and it being a pulp and paper town, there were pulp and paper classes that we had to take that were mandatory. I grew to like them and I took a couple extra ones in that field.

When I was finishing up, I was applying for jobs, and I applied both in and out of Thunder Bay. But ultimately, I wanted to stay in Thunder Bay at the time, and that was one of the biggest opportunities here – at the pulp and paper mill in the chemical engineering field.

I ended up doing my final group project on Resolute’s Thunder Bay operation. And the support that I got from the staff at Resolute was astronomical. I had lots of different people within the organization helping me and giving me different information and things that we needed to finish our project. They were big supporters throughout that.

At our final project presentations, there were a couple people from Resolute who helped support those projects that we brought in, and they voiced that there were opportunities for EITs and it was open for all to apply.

I also did an MBA remotely through the University of Fredericton, which is, honestly, another great reason why the pulp and paper industry is so good. Resolute helped me and supported me through that entire process while I was working here full time, so that was awesome.

P&PC: Do you have some mentors since you’re still in the early part of your career in the industry?

NS: When I started, Resolute had a program called the EIT Program. For the first two years of your employment, they would send you to Montreal for a conference. They send all the EITs in the company there. The last year I went, they’d actually extended it to not only engineers but also to everybody new in the company and new to a career in pulp and paper.

I don’t think [Resolute has] that program per se anymore, but they still have a focus on hiring new EITs straight out of school, especially because of the big industry turnover. We want fresh young minds to come in and bring a new perspective on things, but also to gain knowledge of those who are soon to be leaving.

P&PC: What would you say were the greatest barriers for you as you were starting out in the industry?

NS: Just getting a feel for the difference of being in school to going into the working field. Yes, you still need your book knowledge, but you also really need the personal skills. Also, proving yourself – not only to yourself but to others in the industry. Showing that you are capable and like you’re meant to be there.

“Jump in with both feet and forge ahead, whether you have reservations or not – you’re going to have that no matter what industry you’re going into.”

It’s going on five years since I’ve been here, and the number of females that work here is vastly growing. There are female operators. There are females in supporting roles, females in leadership roles. Females in the industry are really growing. Even in my department itself, I think if I just look at staff, there’s 10 staff members in my direct department and three of them are females. That’s a huge percentage [for this industry].

P&PC: What advice would you give to other young women who are looking to get into the pulp and paper industry?

NS: Jump in with both feet and forge ahead, whether you have reservations or not – you’re going to have that no matter what industry you’re going into, because it’s going to be a new place and something that’s unfamiliar, right?Don’t treat it any differently than anywhere else and just go forward and do your best and good things should come.

Resolute is a great place to work. There’s a lot of great people here. It’s still a growing place, which is awesome to see. There’s been a lot of turnaround lately with lots of retirements, so it is interesting to see – not even just in Thunder Bay itself, but in the industry as a whole.

There are a lot of different people in it. There’s a lot of new knowledge. And it’s just an exciting place to be.

This interview has been edited for length.