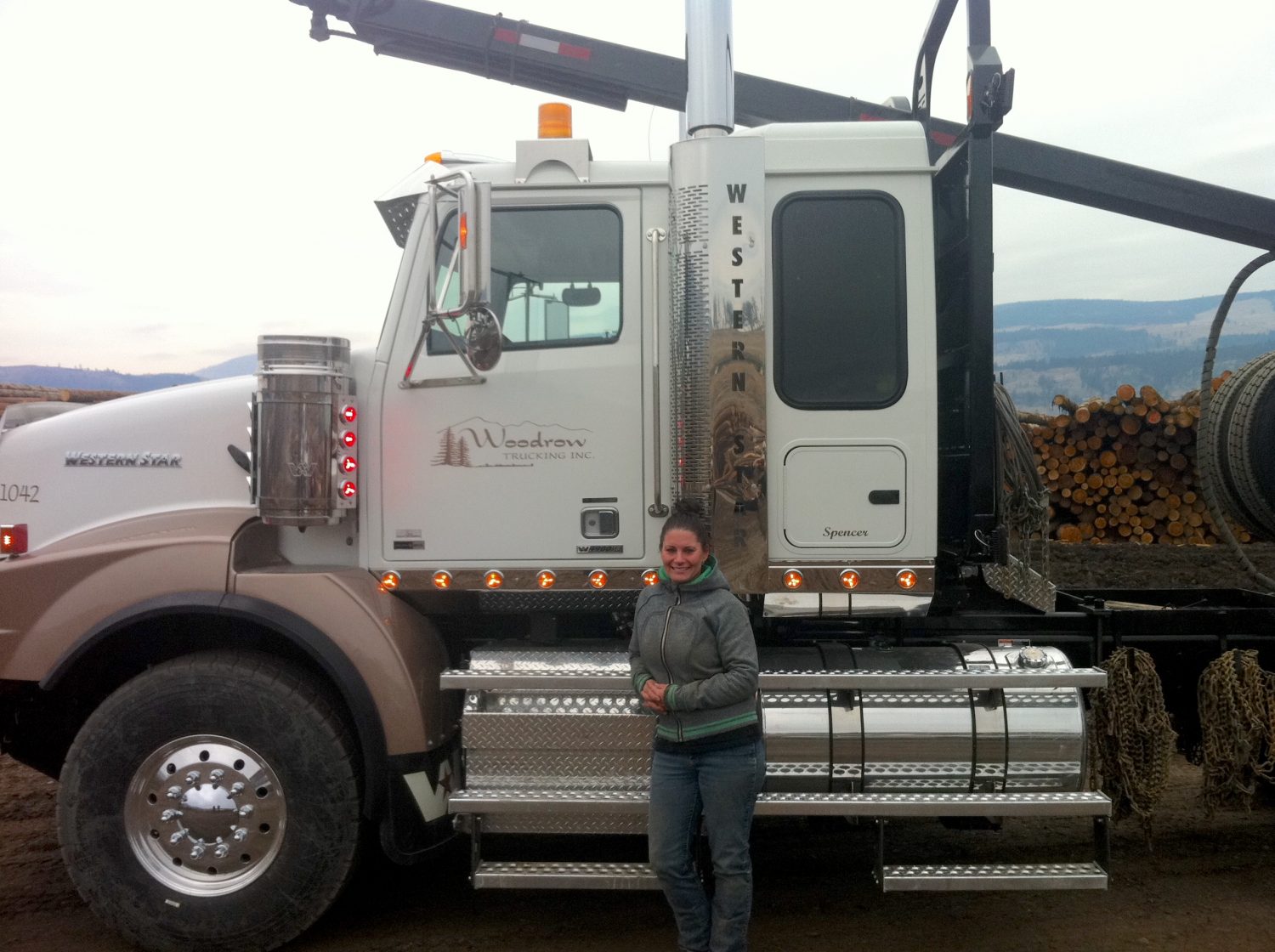 Tiara Seitz is a log hauler and owner of Woodrow Trucking in Lower Nicola, B.C. The 42-year-old got into the industry when she was 22, with two kids in tow, at a time when female truck drivers were rare ­– particularly log haulers. In spite of challenges faced along the way, 20 years later Tiara says you couldn’t get her out of a log truck if you tried.

CFI: What drew you to the log hauling business?

Growing up, my uncle hauled logs in Cranbrook and I can always remember milling around, watching a bit of it, but never put a whole lot of thought in it. When I was 22, an opportunity came up for me to buy a truck. I started asking around and realizing that, as a female wanting to enter the business, it wasn’t really heard of much in our area. There were one or two girls who trucked with their dads, but I was a no name coming into the industry.

But this was an opportunity. I had two very young children. My son was not quite three and my daughter was one. I thought it would be a great way to make a living. I sold a couple cows and got a down payment to buy my first used logging truck.

So that’s how I started Woodrow Trucking. That was January 2000.

CFI: What was it like entering the business back then?

At the beginning, I had asked around a bit about it, but I didn’t get a good reception or feedback on it. I had zero experience as a woman, going out to get my license. I didn’t have anybody say, “Yes, that would be great. Let’s do some training.” I never received that from anyone.

So I thought, if I wanted to get into the industry, I felt my only option at the time was to purchase my own truck. And away I go.

Woodrow is my poppa’s first name – he passed away in 1996. I thought it was fitting to have his name on my door. I see his name as I enter the truck and the last thing is see when I close the door at the end of the day and I know he’s looking after me.

CFI: What is it about the industry that you find appealing?

Highway trucking never interested me. I don’t know if logging did because I grew up in a logging family with my two uncles who trucked my entire life. And at that point my cousin was trucking too. Maybe that’s what drew me to it. I don’t know, maybe it was in my blood!

If it wasn’t for hauling logs and logging, I would probably not be a truck driver. This is what I love to do. I like the bush. I’m contracted to a logging company, Triple G Logging, and I’ve been with them for seven or eight years now. I like my crew – my whole logging crew are like family. It’s a tightknit group. I’m treated well.

It’s something different every day. You’re constantly learning. You’ve always got to be on your toes.

CFI: Were there particular people who encouraged, supported or mentored you?

My family. I wouldn’t be where I am today if it wasn’t for my family and the constant positive feedback from them.

And early in my career there was a gentleman – his name is Dennis Westad. He’s been a huge supporter and mentor. He’s the guy I call with all my questions – even the dumb ones! He’s been a log hauler for probably 40 years. He’s retired this year. When not everyone was kind to a young girl trying to start out, he was. He was my first kind advice. And I grabbed on to that and he’s been my kind advice for 20 years.

I just stumbled upon him at the mill. I can remember it as clear as day. He came up to me and I was probably two weeks in and he said, “You’re the first girl I’ve seen hauling logs. Take all the advice you can get. Take your time and it will come.” I followed that ever since.

It’s neat because my son, Spencer Stewart, also trucks now and my son’s first trucking job as an owner/operator was hauling alongside Dennis Westad. It was full circle.

It’s awesome because my children grew up in the logging truck with me. They went everywhere with me. When they got bigger I bought a truck with a sleeper so I could pack them around with me everywhere. Probably that would be frowned upon now! But it’s funny because literally my son has spent his entire life in a logging truck. He went from being a passenger to being my work buddy now. It’s great. 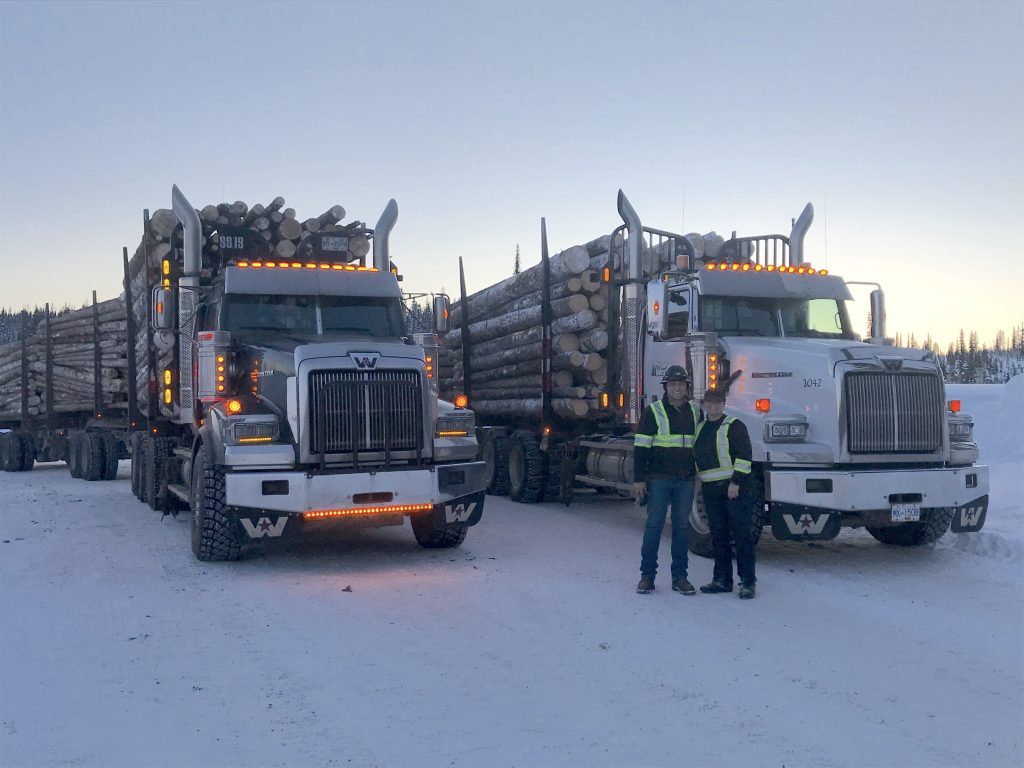 Tiara and her son, Spencer Stewart, are both log haulers.

CFI: Do you find there are particular challenges or hurdles for women in the industry? Any recommendations for how we can address them?

When I started, definitely. I didn’t necessarily feel welcomed. And for me I think that’s what gave me the success I have today. I had so many people not confident in me that I needed to show them that just because I’m a girl, young and inexperienced, I could learn the same as anyone else. I needed to show that I had the ability.

I’m 20 years into it and I still get some people who don’t feel I should be out here, but it think it’s just old-school mentality. There were some who thought that it’s a man’s job. Probably 10 years ago I went down to the coast and I had a loader man who absolutely refused to load me because I’m a woman. But that was 10 years ago and I’d be very shocked if that would happen anywhere now.

Doors are going to be closed – open them up. Don’t take no for an answer.

When I went to buy my very first truck – I’ll never forget this and I kind of thank that person for this – I sat at the salesman’s desk and was talking to him and he was fidgeting with some paper. He looks at me and he goes, “Do you think you are going to be able to lift the chains?”

He said, “Do you think you are going to be able to throw wrappers?”

And then he said, “Yeah, I don’t know. I just don’t know how girls can make out in this business.”

And I don’t know why, but that right there ignited something in me. I absolutely had to do this. But had I been anyone else, I might have listened to that and thought, “Oh my God, he’s right, what am I doing?”

So, my biggest advice is don’t let doors close in your face. If you do you’ll never accomplish something great. I’ve had a great 20-year career and I think I’ve given my children a fantastic life.

This interview has been edited for length and clarity.

This post is part of CFI, Pulp & Paper Canada and Canadian Biomass’ Women in Forestry project celebrating International Women’s Day on March 8. Find more content here and follow on social media with the hashtag #WomeninForestry, as well as #IWD2020 and #EachforEqual.