A good place to be: Q&A with Al-Pac’s Erin Woodland 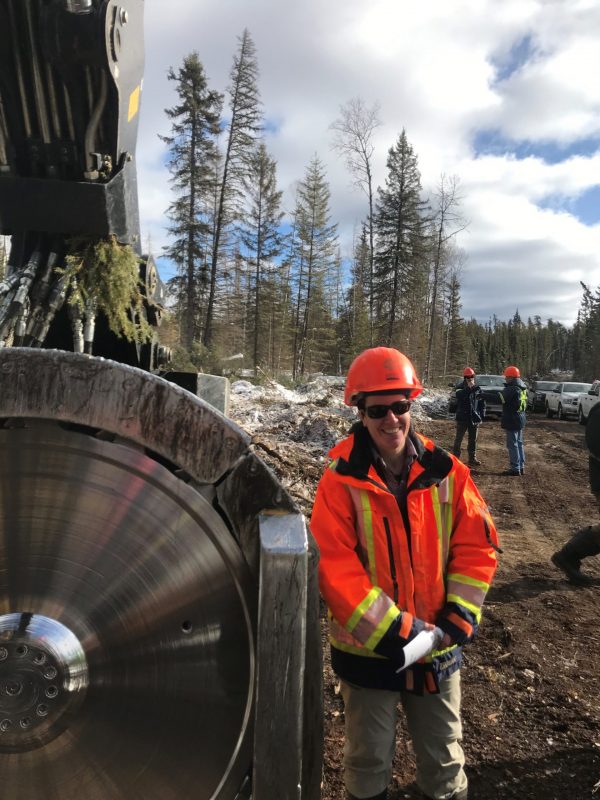 Erin Woodland has been involved in forestry since high school, and has experience working in almost every aspect of the industry, from engineering to silviculture to operations. As the strategy and operations team lead at Al-Pac, based in Boyle, Alta., she supports operations coordinators and ensures that the company meets its commitments. A passionate advocate for the industry, Erin encourages women to consider forestry as a career and find mentors to help guide them.

I always say I was really lucky. I got to do a year-long high school forestry program in grade 11 and grade 12. So, from that, I had a career direction before I even graduated high school. I knew I was going to go to college in the forest technology program. I did some job placements with local companies and that gave me extra work experience, which led to summer experience and some really great encouragement from the people I worked with at that time.

CFI: What is it about forestry that you enjoy the most?

As long as I have been in forestry I have loved it and I’m passionate about it, I’ve never defined the one thing I enjoy the most. I love being outside – that’s a huge part of it, being out in the forest, and also managing resources and supporting people. I enjoy seeing the results of what I’ve done, whether it’s logging or silviculture. I also get to work with great people. I really enjoy the comradery from being in the industry. It’s a good place for me to be.

CFI: How has your career evolved over the years? What led you to join Al-Pac?

I’m originally from B.C., but I went to do my degree in the Maritimes at the University of New Brunswick. When I finished school, I started working in northwestern Ontario. About three years ago, I was looking for something new and thought I’d start to head west again. I had a couple of criteria: I wanted to be in industry, I still wanted to be in the boreal forest, and I was looking at either Alberta or Saskatchewan. I saw an opening at Al-Pac and thought I’d give that a shot. So, I reached out to them, interviewed, and here I am three years later.

I’ve had a really varied career, and I really enjoy that. I really like to have experience in all aspects of forestry. When I started working as a summer student in the Okanagan, I was doing some engineering work. I then moved into silviculture. I did forest engineering in university, but upon finishing school, I worked in a silviculture role for three years. After finishing school, I was given the opportunity to do interim full-time positions, which was really good. So, I did some operations, some planning, and then I just kind of replicated that throughout my career. A lot of the time I spent in Ontario, I was either logging or in operations with a lot of the day-to-day planning, and that led me to doing operations work when I came to Alberta. In the year-and-a-half before my most recent position, I actually did some work on retention and recruitment of professional log truck drivers, which is probably the most different thing I’ve done in my career to date because I was working a lot more in human resources, marketing, and influencing to try to figure out how we’re going to fill the driver shortage.

CFI: You’ve really done a mix of everything!

I really like it that way. I like the wide variety. Maybe that’s part of what I like about forestry, too, when I think about it – that there’s so much you can do and it’s so interconnected. It’s rewarding.

CFI: So, you were recently promoted to become strategy and operations team lead at Al-Pac. What does that role entail?

Right now, I support our operations coordinators with their contractors that are logging, building roads and maintaining roads. I also help manage our reputation, making sure that we’re delivering and cutting the volumes of wood that we’ve committed to, on time and on budget, and making sure that our safety and environmental performance is where it needs to be and we’re monitoring it. Support is the key word there – I make sure that the coordinators have what they need to get their jobs done on a day-to-day.

CFI: Did you have any mentors that helped you in your career?

Yes, but I probably didn’t realize it at the time. When I look back, there were some people that definitely helped me along, whether it was a long-term thing or just encouragement at a certain point in time. When I first started working in the bush, obviously there weren’t a lot of women back then. But, nobody ever said that there shouldn’t be, of the people I was working with. They encouraged me to go to college, get my degree, and do different jobs. Nothing held me back in the beginning.

Then, later on, there were some people I drew on more for the support. There’s a friend of mine and a mentor that I still touch base with now and then – she’s a couple years older than me, so she has lots of experience and is good to consult.

CFI: How important do you think mentorship is to help get more women involved in forestry, and, more generally, to encourage young people in the industry?

I think it’s huge because it’s one of the ways that we can communicate to people the opportunities and the green jobs that a person can have in this industry. We’re competing with so many industries for people right now. Our own sustainability is dependent on us doing things like mentoring and getting the word out.

CFI: As a woman, when you first started out in the industry, did you find there were particular challenges or difficulties?

No, though there weren’t a lot of us. In my first few years, there was one other woman who has a summer student. So, there weren’t really difficulties from a people perspective. But, things like coats didn’t fit right, because back then, there wasn’t a lot of women’s clothes. So, it’s cool to see how far some of that has come along, that they make durable clothes that fit women now.

Along the way, there’s been the odd person who hasn’t been as encouraging, but I think, in general, the people that I’ve encountered have been supportive and helpful. That might be hand-in-hand with when they see you putting an effort in, because then they’re going to reciprocate.

CFI: Do you have any advice to share with women who are interested in a career in forestry or are looking to move into a leadership role in the industry?

For those just starting out, make sure that you check forestry out because there’s so many things that you can do. People think the industry is the way it was years ago, but it’s not. There’s so much innovation in it, along with the environmental aspects of it. There’s so much more to do now than people realize, so I think there’s something in it for everybody.

CFI: What do you think needs to happen to further encourage women into the industry and to support those women already in forestry?

We need to support each other. It sounds obvious, but I read an article in 2019, that, at times, women haven’t been supportive of each other, and that’s huge. But I see more women supporting each other now. It gives you a more positive outlook on things; it’s almost a band of support that encourages everyone to move forward as a whole.

This post is part of CFI, Pulp & Paper Canada and Canadian Biomass’ Women in Forestry series celebrating International Women’s Day on March 8. Find more content here and follow us on social media with the hashtags: #WomeninForestry, #IWD2021 and #ChooseToChallenge.

Remember to join us for the Women in Forestry Virtual Summit on Mar. 9 at 11 am ET/8 am PT! It’s FREE to register. Sign up now!